The Bead Affaire - the Best Bead Show in Town!!

Louise Erskine and I will be selling our handmade glass beads and finished work created using our glass beads.

I have recently been inspired to work with Fusing Dichroic Glass

Posted by Heiden & Engle Studios at Thursday, October 19, 2017 No comments:

Louise Erskine and I are excited to be selling our handmade glass art at APPLEFEST this weekend at Wachusett Mountain, in Princeton, MA.

We will have an assortment of Flameworked, Fused and Slumped Glass Art that we've handcrafted ourselves; work for the home and personal adornment…

Some of the items we will have for sale are:

We will be indoors in the Main Lodge.

Children 6-12
$6 Advance, $9 Door
*Children 5 & under are FREE
(… more ticketing and event information on their website)

Examples of work that will be available for sale: 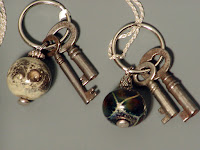 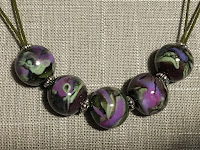 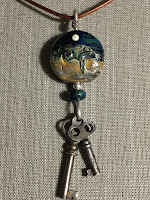 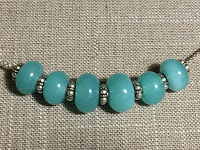 We’re looking forward to seeing you there!!

I joined in on a special bead adventure that I'd like to share with you: Beads on the Trail 2017. There was a call for beads to support children with cancer or serious illness. These beads are to travel with mushers on the 1000 mile long Iditarod Trail Sled Dog Race.  Each artist who signed up for the challenge made a set of 5 Alaskan themed beads.  At the end of the race, one bead will be kept by the musher and the other 4 beads will be used to raise money for BOC and go to the children in the BOC program.  Below are pictures of the beads that I created and sent along to Alaska.

Being a part of this event has added to an awakening I’ve been feeling lately. The need to be an advocate, to help others; that this life is precious, and I need to focus on what matters most to me.  Helping others has always been at the core of who I am, it brings me life.  Sometimes I get lost, but re-awakening is humbling and refreshing.
Beads on the Trail 2017 is organized by Beads of Courage (BOC) with the help of Artmosphere Studio, the goal of this annual event is to connect Alaska's Last Great Race (Iditarod) with the kids in the Beads of Courage program, who are in a race for their lives. Mushers share the strength and courage they need for Iditarod in honor of the children who will receive the beads they carry on the 1000 mile long Iditarod Trail Sled Dog Race.

Beads of Courage has a unique goal; they are a non-profit group that supports children with cancer or serious illnesses and their families. BOC acknowledges each treatment undergone by a child by giving them a bead.  Each child’s bead collection grows and represents badges of courage and honors the wars they are fighting with their illnesses; fighting for their lives.  To learn more about Beads of Courage: http://www.beadsofcourage.org
Artmosphere Studio, in Anchorage Alaska, is a shared working studio space.  They are open for classes and special events by appointment. Artmosphere Studio is working with Beads of Courage in 2017 to send beads on the Iditarod Trail for the 6th time.

Also volunteering and helping with the organization of this event are the Hot Headed Honeys:   Alaska’s first co-op of lampwork artists dedicated to promoting lampwork art and artists in Alaska and providing creative and business resources to  co-op members.
The Iditarod: “A race covering 1000 miles of the roughest, most beautiful terrain Mother Nature has to offer. She throws jagged mountain ranges, frozen river, dense forest, desolate tundra and miles of windswept coast at the mushers and their dog teams.  Add to that temperatures far below zero, winds that can cause a complete loss of visibility, the hazards of overflow, long hours of darkness and treacherous climbs and side hills, and you have the Iditarod. A race extraordinaire, a race only possible in Alaska.  The race starts in Anchorage, in south central Alaska, to Nome on the western Bering Sea coast.”  This year's race starts on March 4th.  To learn more about the Iditarod:  http://iditarod.com/about/ 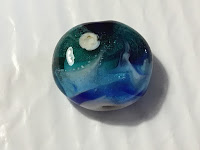 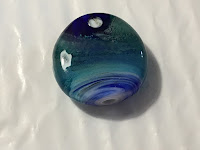 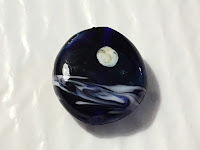 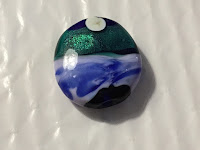 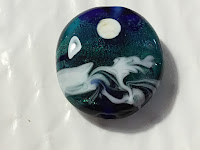 Posted by Heiden & Engle Studios at Friday, February 17, 2017 No comments:

Heiden & Engle Studios
I love to play with glass and create works that bring peace to my soul.

I work with my husband, Paul, in the rural community of Hubbardston Massachusetts with the simple goal of creating jewelry and small art objects of the highest quality from glass and other natural materials. Much of our inspiration is from the Art Nouveau period along with organic patterns and colors found in nature.

My flameworking career started in 1997 after attending a Bead Exhibition curated by Kristina Logan. On that night, the beauty of glass beads became the inspiration for a career change; unlocking the door to a new life, and fulfilling my need to express myself through art.

Trying new techniques, materials and playing with shape and color continue to keep glass an enchanting medium! I enjoy the camaraderie and artistic challenges of collaborating with others to create work that takes a piece to another level.

Prior to playing with fire, for 20 years I designed computer applications for the Financial and Insurance industry. The need to design / create has always been an important part of my life.